About Envyride and how I fell in love with electric rides 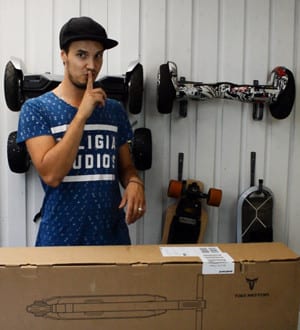 My name is Tobias. A simple Swede with an amazing wife and 3 kids.

The following is the short but uncut story of how I fell in love with EV’s, electric vehicles.

It started at a young age when I first fell in love with skateboarding and everything else that made the adrenaline pump through my veins for that matter. Unfortunately, I never got any good at riding, but still had a blast doing so.

As I grew older, my parents got me my first snowboard and I then started to compete in Slopestyle and Big Air back in Sweden at the age of 13, this time I actually won a few prices.

In 2008 I got my degree as a car technician and started working at a local car repair center.

Throughout my childhood years, I lived in the garage with my dad and tinkered with everything from an old radio to cars. I never took no for an answer, no matter how many times he told me things wouldn’t work. I did prove him wrong many times, but not always.

I got my first electric scooter at a very young age but back then they did about 5 mph and I could barely get around the block before I had to plug it in for an overnighter. I still look back at those memories with a smile on my face and remember my young self thinking, what if they could go faster.

My next encounter with electric rides wasn’t until early 2015. I had just found out about the hoverboard craze that was going on in the US and was so eager to get one. However, I couldn’t afford one back then so I was up many nights in a row watching videos, reading and just researching. I saw many questions arise to which I could, without actually owning a hoverboard of my own, help answer. I have my background as a car technician and the fact that I still loved tinkering with electric things to thank for that.

I then started a blog where I explained how they worked and how to repair them if they broke down. After a while, things started to heat up. Literally, hoverboards started to catch fire. So I wrote about that and the reasons that I could come up with which might have caused these accidents.

Then I started to get emails from people on the other side of the world who asked me for advice on which model they should buy. I told them I didn’t own one myself but had done extensive research on all the available models.

I remember one guy named Thomas who asked me if I had an Amazon affiliate link for the product that I had just recommended him. I didn’t know what that was at the moment. So he explained that if I registered for the Amazon affiliate program, which I did, I could earn a commission from his purchase and that was his way of saying thank you for the help.

After a few emails had been answered, I had enough to actually buy myself a hoverboard. So I picked the model that I had recommended. I then wrote a detailed review of the product and things just started to pick up. From there I bought another one, then another one.

I then did the same thing for the people back home in Sweden. Unfortunately, in Sweden, there weren’t any 100% safe options to recommend. So I contacted the companies which I recommended in the US and asked if I could help them set up shop in Sweden. They weren’t interested, but one gave me their contact in China. So I reached out to him and ordered 10 hoverboards. I sold those units the same day they arrived and since then I’ve sold more than 2500 units of hoverboards, electric scooters, and skateboards.

Much of my work has been referred to in articles on large US and Swedish news sites. I have also been asked to help advise the Swedish transportation administration on how they should tackle the future of electric personal transportation vehicles.

Today my e-commerce, Airboard Sverige, is one of the largest online retail stores in Sweden who specializes in electric vehicles. The store itself pretty much self-sustainable and that lead me to create Envyride, because my passion still lies in testing, researching and endorsing great products.

I love a happy customer, and to me, it doesn’t matter if you buy directly from me or from someone else, as long as you are happy with the product that you get.