Gotrax just released their first electric scooter a while back, the Gotrax Glider. I did initially test it back at release and now I’ve gotten my hands on one to make a more thorough review.

Design-wise it does look a lot like many other scooters on the market. I know for a fact that it uses thttps://gotrax.com/shop/electric-scooters/glider/#a_aid=envyhe same factory that I do for my electric scooter brand back in Sweden. I also know that the aftersales and the support service at Gotrax are great which means less to worry about.

Enough said, let’s go take it for a spin and see what it’s all about!

At first sight, it might not look like much due to its slick design but it actually boasts a 250W hub motor mounted inside the front wheel, giving it enough power to move my 171 lbs at a speed of 16 mph. However, the speed diminishes after you’ve lost around 50% of the battery power. At that point, it only reaches about 10-12 mph. A decrease in top speed is something to be expected as battery power falls.

Tip: Don’t forget to check out their latest addition, the Gotrax GXL scooter.

The front tire is 5.5″ and the rear tire is a 5″, both made out of solid rubber which gives you good grip and little resistance while riding but makes the ride more bumpy on uneven surfaces.

The specifics say you can get around 9 miles out of a fully charged battery, taking into consideration that these numbers are benchmarked during optimal riding experiences. Which most likely won’t be the case of your rides, nor was it mine.

The recharge time is about 2-3 hours which gets you out there riding again fairly quick.

It has a great folding system, just step on a lever and it folds together nicely. The only complaint here is when you want to unfold it. If you’ve been riding in the rain, or snow as I have, the unfolding lever can be found underneath at the front tire, so you might get a little dirt on your hands. This isn’t a big issue just a small complaint, other than that it’s easy to fold and unfold the electric scooter.

The scooter weighs in at around 17.2 lbs and can fit in even the smallest of car trunks, it also fits neatly between your legs while taking the bus or train.

The LED-display is, at least with my model European and display kilometers instead of miles. Not that it bothered me since that’s what I’m used to.

The ride was a blast and I let the oldest of my boys try it about. Being 6-years-old he actually handled this larger scooter very well. He is tall enough to see over the handlebar without any issues. He had no problem at all braking and accelerating even though with his low weight of 48 lbs it accelerated really fast and he had to be very sensitive to the brakes.

He reached the top speed in a matter of seconds whilst I had to ride for about 10-15 seconds to get it up to around 15-16 mph. I drained the whole battery in 6.4 miles while riding on various terrain and up-/downhill.

I can imagine this being the perfect scooter for a kid weighing 45-120 lbs. They would get some kickass distance and acceleration out of it. Thanks to the two different driving modes, you can easily adjust the top-speed between full(16-17 mph) or economy mode(9-10 mph). Another great feature for the younger riders.

An annoying thing with electric scooters is that the battery indicators fluctuate a lot while riding. So in order to know the exact battery percentage, you need to stand still. This happens because of a few reasons: 1. It has regenerative braking so it actually recharges the battery when you brake or go downhill. 2. It calculates battery consumption speed depending on how much power the motor needs at that very second. This gives you faulty values and therefore its best to check it while standing still.

It can handle minor inclines of around 15 degrees with me on it while my 6-year-old did go up even the steepest hill we have around here. God do I wish to be a kid again now with all these new electric toys!

It’s a great model for those on a budget and it delivers good distance and speed with a high-quality framework that will withstand the test of time.

Features of the Gotrax Glider

Surface: Rough asphalt with some elevation

So who is the Gotrax Glider that we just reviewed for?

I would say that the Glider would fit both adults and kids. I myself as an adult would prefer a better distance per charge since my weight and the terrain lowers that promised 9 miles distance by around 2 miles. But hey, that’s always the case with me. I want more, but for this price, you cannot go wrong with the Gotrax Glider.

For a kid, this is a great scooter. My oldest uses his every day and we rarely have to worry about recharging it. Comparing it to other models for children, Gotrax gives you a better distance, faster speed (if you want to), and it recharges about 3-4 times faster. A lot of scooter for your money. It’s maintenance free too which reduces the costs even further. 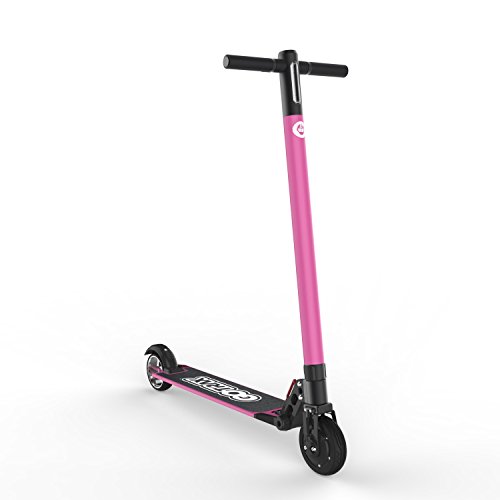 How much does an electric scooter cost? - Determining the price

How does an electric scooter work? - A look under the hood

$749.99
Added to wishlistRemoved from wishlist 0