The razor power core E90 electric scooter from Razor is a well thought out product indeed. I’ve always been complaining about their runtime and it was about time they swapped out those chain-driven motors for more energy efficient hub motors.

The E90 is actually a way better choice than the standard E100, apart from the E100 having a pneumatic front tire which helps a lot in reducing shocks.

Let’s jump on it and see what this thing has to offer.

So the E90 has gotten its name power core thanks to Razor switching out the old chain-driven motors for a new 90W hub motor which outperforms the old one by miles, literally. The new motor gives you 100% more runtime on a single charge and since Razor still uses a 12v lead-acid batteries with a charging time of up to 12 hours this is more than welcoming. Did I mention the motor is maintenance free too?

It’s got a perfectly balanced top speed for kids around 5-10 years of age and my boys just loves it. My youngest is 4 and is used to riding various e-rides. He swoops around our outdoor track without a problem in the world.

Assembly was as easy as 1, 2, 3. All you have to do is to fasten the handlebar with the scooter body and your kids will be up and running.

As with all Razor electric scooters, the quality is top of the line and that there are so many cheap spare parts available just makes it even better.

It can reach a top speed of 10 mph which is enough for the targeted audience needs, at least when it comes to my kids aged 4 and 6.

One thing that I felt was missing is the push-button throttle. I would have liked for them to be able to adjust speed better with a variable throttle, however, they don’t seem to mind it.

Comparing it to the E100 that I reviewed a while back this thing has the same top speed but double the runtime and it even cost a few dollars less. I don’t really understand how that works, but I’m not complaining.

It can accommodate riders up to 120 lbs, has a retractable kickstand, the traditional kick-to-start function which means that you have to kick up to 3 mph in order to get the engine to work, and a hand-operated front fender brake which is actually very good.

The Razor PC E90 has a really good runtime of 80 minutes. Very easy to learn and then master. My kids are age 4 to 6 years old at the moment of this review and they can both handle the scooter with ease. Perfect choice for kids 4-10 given the 10 mph top speed and the scooter's weight limit. A great first scooter that gives them plenty of ride time compared to the standard Razor scooters 40 minutes.

So the kids have been taking turns on the new PC E90 for a few days now and they have mostly good things to say about it. I myself can surely say that I have no issues with the Razor recharging times anymore. We just let it charge over-night and the boys only drained the battery too really low levels once during this 5 day period of riding.

I weigh 171 lbs and it did actually hold me up and run me around pretty good. The motor isn’t built for it though and even though the frame held for an adult short ride I wouldn’t recommend it. But for testing purposes, I had to give it a try.

Kids around 6-13 years will be very happy with the top speed of 10 mph, there is no reason to get anything faster than that. The wheels are both solid and the front wheel is made out of urethane(plastic) just like a normal kick scooter while the rear wheel is TPU(rubber). Don’t expect good grip on wet surfaces or any shock reduction. It can get a bit bumpy, but these type of tires also contribute to the longer runtime per charge.

The scooter is easy to learn and the push throttle, even though it’s not my favorite, works great for the kids. It might not be as thrilling for the older kids around 10-13 as it is to the younger ones. If you know that your kid is going to want some more speed you might want to read our Razor Power Core E100 review. 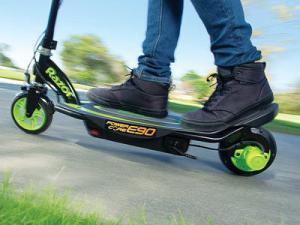 I liked the scooter and it does perform very well. The one thing I have a hard time with is the plastic front wheel as it makes it very bumpy on uneven roads. You won’t be riding it on gravel or any old roads as that will probably make your hands numb just by looking at it. Best suited for concrete, bricks, or newly made asphalt roads.It is far more powerful than the normal E90 scooter bot in terms of torque and speed.

If your kids are in the late age-range let us say 10-13 I would consider the Razor Power Core E100 or the Razor E300. If you have kids around 6-8 years this will be an amazing scooter that can follow them for a few years before you have to upgrade to a more powerful model.

As always I recommend that you buy some reflection, a clip-on LED headlight, and a horn since these don’t come as standard on Razor’s scooters.

How much does an electric scooter cost? - Determining the price

$449.99
Added to wishlistRemoved from wishlist 0

Best Electric Scooter with Seat in 2023

$479.00
Added to wishlistRemoved from wishlist 0