The Segway ES2 vs Xiaomi M365 is probably the most requested comparison I’ve done, so far.  After I published the Segway electric scooter comparison guide I got a bunch of emails from readers asking me to do this one next, and here we are. Today we’re looking at Xiaomi vs. Segway. A battle of the brands!

These two scooters are quite similar, and there are a few reasons to why this is.

A few years back Xiaomi, who are famous for their smartphones, together with other backers, invested a good $80 million into Ninebot. Ninebot then went out and bought Segway and they have since had a history of co-developing products.

However, the two still operate under their own brand and with their own product lines. However, they do unite under a so-called “strategic alliance” in order to create smarter and greener short-distance transportation vehicles.

Enough with the history lesson. Let’s see what these two has to offer!

Comparison table for the Segway ES2/ES4 vs Xiaomi M365

Even though the two scooters have a somewhat similar appearance there can only be one winner, right?

Since you have the option to purchase an additional battery pack for the Segway by Ninebot electric scooters I went ahead and added the specifics of the boosted model which goes under the name ES4.

The cost of each model

The first of these scooters to hit the market was the m365. It was first launched in December 2016, in China, after being a successful crowdfunding project through the Mijia platform.

The price history on this one isn’t anything special and thanks to its great reviews and performance it hasn’t deprecated in price at all since it was first launched.

The ES2, on the other hand, had its launch in Q4 of 2017. Its priced a bit higher than the Xiaomi scooter and that is even without taking the add-on battery pack into account which would add an additional few hundred bucks to its price tag.

Below is a list of these three products and their prices are updated automatically.

The differences between these two 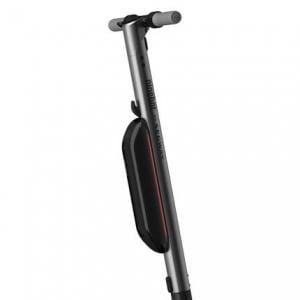 Out of the box, I would say the Xiaomi electric scooter gives you more bang for your buck than the ES2. However, if you upgrade the ES2 into an ES4, the M365 loses much of its advantage except the price.

The ES4 would give you an additional 10 miles per charge and is 3.1 mph faster in comparison with the M365. It also boosts the peak motor power by 100W giving you a bit more torque. But there are a lot of copycats of the m365 with 350W motors at the same price. Those might be worth your time.

When it comes to its design I do like the folding system of both scooters. The scooters fold down nicely, and both attach to the rear splash guard which makes them more stable when carried around.

The brakes are much more effective and stable on the Xiaomi model due to its rear disc brake. Not only does it feel a lot more secure with a rear mounted brake, you can also slow down smoothly by just letting go of the throttle.

The ES2 has a rear foot brake and an electric motor brake that does a good the job. The difference is that you’ll probably only be using the front wheel motor brake as I do and it tends to get a little sketchy from time to time. Especially if you’re in a hurry to stop. It does take some practice to keep your body weight low when braking hard, but we’re talking about minutes here. 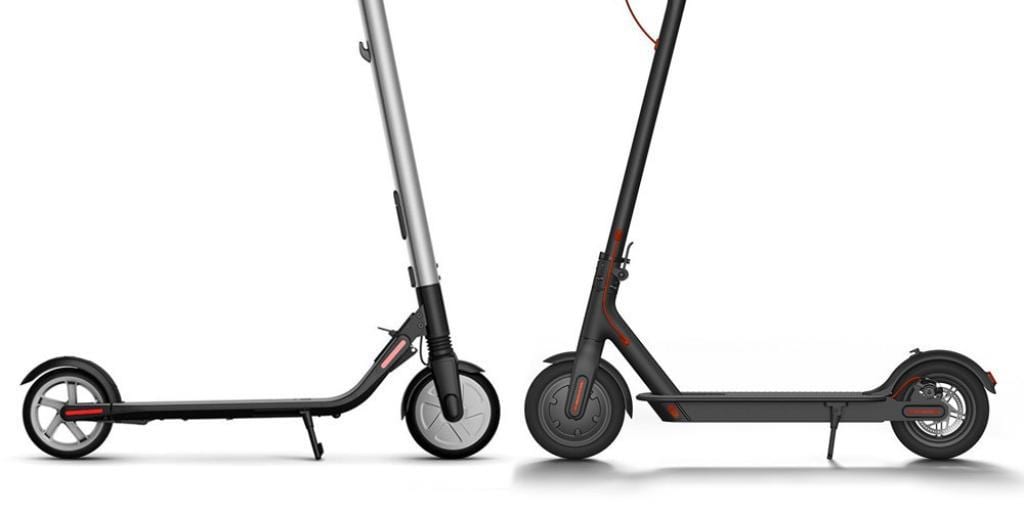 Another difference is the wheels. The Xiaomi scooter has larger pneumatic tires of 8.5” both in the front and rear, whilst the Segway has an 8” front tire and a 7.5” rear tire both made out of hard rubber. Having two pneumatic tires gives the M365 a smoother ride on gravel and other uneven surfaces. They also provide a decent shock reduction. On the other hand, the ES2 has a built-in rear and front shock absorbers that help reduce bumps. But I still consider the M365 to be the more versatile and comfortable option.

Both have a strong LED headlight and a tail light that gives you good visibility even during the darker hours of the day. The ES2 has additional ambient led lights underneath the footpad which can be adjusted within the mobile application. A cool but not really necessary feature.

The ES2 has a display mounted at the top of the handlebar which shows you real-time data, whilst the m365 only has a few lights to show you how much juice you have left. However, you can also check the real-time data in both the Xiaomi and Ninebot mobile application.

Which brand works better for you in the Xiaomi vs. Segway battle? Which one will it be, or did none of the above fit perfectly into your life?

Perhaps the new m365 version the Xiaomi pro might be more interesting?

If you’re just looking for a solid high-quality scooter to take you a few miles back and forth I do suggest that you have a good look at the Xiaomi M365 since its a very good scooter straight out of the box. It’s similar to the standard ES2 but is a cheaper electric scooter.

On the other hand. For those of us who want to go further, or at least want the option to do so in the future. The ES2/ES4 is the better, but a much more expensive choice. Especially if you want to upgrade it straight away. For a more in-depth review of the ES2, you can read my full review.

The thing is if you’re willing to invest this amount of money into an ES4. I would feel bad if I didn’t tell you that there are numerous other models that are much more powerful but have a similar price tag. So if you don’t need the lightweight and more portable option. Take a look at our top reviews here and you’ll see what I’m talking about.

Thanks for reading and as always, if you have any questions leave a comment!

$799.99
Added to wishlistRemoved from wishlist 0