The Segway ES1 also known as Ninebot Segway no 9 is the first electric scooter to come out since Ninebot bought up Segway and rebranded into “Ninebot By Segway” around 2015.

It is a successor to the Xiaomi Mijia M365 which Ninebot helped Xiaomi create.

So, let’s dig deep and see what the ES1 has to offer.

The ES1 is equipped with quite a lot of great features and the specifications of the scooter are solid. By the first touch you can feel that quality wise, it’s a Segway product.

It has a built-in so-called hub motor of 250W which can reach a top speed of up to 12 mph. It has a speed limit mode so you can limit the speed by holding the on/off button to set it in economy mode, normal or sports mode, or if you want you can set an exact max speed-limit within the mobile application.

The lithium-ion battery powering the scooter promises a distance of up to 15.5 miles before having to recharge it for around 3.5 hours. It’s features and looks are almost the same as its bigger brother the ES2 which has a 15.5 mph maximum speed and some other minor things like led lights for low light conditions, brake light, and a rear suspension.

If you feel that 15.5 miles (25 km) aren’t enough, then you can also purchase an additional battery that can be mounted on the scooter frame. By mounting the add-on second battery pack, upgrading it to an ES3, you can reach distances of up to 28 miles on both the ES1 and the ES2. On the ES1 you also get an additional 3.1 mph in speed performance giving you the same maximum speed as the standard ES2 (about 15.5 mph)

To think about; If you want the extended range and are considering buying the extra battery pack, the only difference between the ES1 and ES2 is the rear-shock, a brake light, some led-lights, and top speed/torque. If you want to compare all Segway electric scooters side by side, check out this comparison table .

Reminder: As with all electric rides the max distance and top speed measured by the manufacturer is under perfect conditions. Something you rarely come across in real life.

The ES1 from Segway is a good scooter out of the box. But with the add-on battery pack, you can get even more out of it. I love the idea of being able to buy extras for an extended distance and to increase its top speed. This makes it target a larger audience and it is a good quality product with many good features.

The riding experience of the Segway ES1 is similar to both the Mijia M365 and the ES2 although a tad slower. As I told you above the distance in real life differs very much depending on the rider weight, surface, and incline. I would say the medium distance you are going to get will be around 7-11.5 miles on a single charge. If you decide to get the external battery I could see it going an additional 5-8 miles (19.5 miles).

The heavy coil suspension inside the rear shock absorber can handle minor bumps and the large wheels can take on the occasional small stone and pothole without major concerns while still providing a smoother ride than some cheaper competitor models. I do however feel that the front shock isn’t helping too much. It might reduce some of the shaking ridings on uneven surfaces but I can barely feel the difference with or without.

It has a moderate speed and the acceleration in sports mode are decent. The Segway ninebot es1 electric scooter feels sturdy and quality wise I have nothing to complain about except the foam grips which I can see getting destroyed over a couple of months of usage. The second issue I had was that the color of the anti-slip foot pad was light grey. Dirt is very visible on it and can ruin its appearance a bit. Other than that it comes with a ground clearance around 73 mm which is higher than most electric scooters, but you should still be a bit careful when jumping off the curbs.

Also read our review of the Glion dolly , another electric scooter that is great for both adults and teenagers.

Features of the ES1 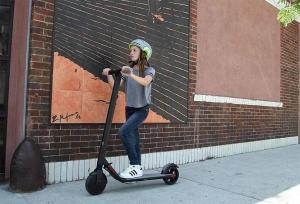 Distance reached: 8 miles (the manufacturers specs say 25 km or 15.5 miles total – we didn’t ride it until it was dead but suspect the remaining battery life would have given us another 3 or so miles)

I would recommend the Segway ninebot ES1 for adults and teenagers around 14+ years old who want to add some fun to their commute. It is sturdy and well built leaving you as a parent with no concerns about safety. There are two brakes in case one would mess up you always have the other. Would work perfectly as a commuter scooter and with the extra battery pack available you can even extend its range from shorter- to longer commutes. Plus for as a commuter scooter, we like the cruise control and the fact that it only takes 5 seconds to engage when riding.

There are some neat features to this electric scooter but nothing groundbreaking other than the folding mechanism. And if you think about it, that’s kind of sad. However, it is a reliable and trustworthy scooter that will take you from point A to point B without any problems. We would like to see it have a higher max speed and longer range. However, as we mentioned, you can get longer battery life and range if you strap on the external second external segway battery

Other Items to Consider

There are over a hundred different electric scooters on the market. Your choices begin to narrow depending on what you’re trying to do with your scooter.

Then, you’ve got different “generations” of rides. Like this segway es1 generation 2. Make sure you aren’t buying a gen 1 machine when gen 2 is out there. That is, unless, you’re in the market for a cheap electric scooter at which point you can probably get quite a deal.

One of the less traditional models is the Segway Minipro. It’s similar to the original segway transporter but more compact and more advanced with a max speed of about 10 mph.

If you want a very similar scooter that’s got better brakes, goes about the same mileage on a single charge (without having to purchase the optional second battery to extend the maximum range), gives the rider a smooth, comfortable ride and has a cruise control option then you should look at the GoTrax GXL V2. In our opinion it’s a better scooter for the money. It doesnt have an electrical brake / mechanical brake either — it’s got a disc brake which, in our opinion shortens the safe braking distance substantially.

If you’re buying a segway kickscooter for a kid, you should check out the Ninebot Zing e10 which is similar to the segway es1 generation 2.

OTHER ELECTRIC SCOOTERS TO CONSIDER

$409.99
Added to wishlistRemoved from wishlist 0

How To Assemble A Razor Electric Scooter – Quick And Easy

Taking An Electric Scooter On A Plane: Is It Allowed?